Muzio Clementi's contribution to the history of music.

La contribució de Muzio Clementi a la història de la música.
ABSTRACT:
Muzio Clementi (1752-1832) has been one of the most multifaceted and influential musicians in the history of the piano. His long life represents a bridge between the Baroque—from whose fountains he drank during his Roman youth—and the Romanticism portrayed by the individuality of its most representative instrument—the piano. Settled in England since the age of 14, his activity encompassed piano performance, conducting, music promotion, composition, didactics, music publishing, and piano manufacturing. He excelled extraordinarily in all his facets, being an active part of the European society of the moment and leaving a legacy that has endured to our days and that we want to summarize in this article. 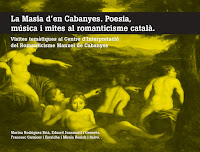 Musical convergences in times of revolution. The London period of Ferran Sor (1815-1823) and his relation to Muzio Clementi and members of the London Pianoforte School

ABSTRACT:
The beginning of the 19th century marked a vibrant period for the piano in London. When Ferran Sor arrived in the city in 1815, Muzio Clementi had already made an extraordinary contribution to piano development with a method, several publications and the building of pianos. The piano became popular and affordable in England. What’s more, Clementi would be a pioneer who educated the first generation of professional pianists, known today as the London Pianoforte School. Sor would come into contact with them and the world of piano composition, finding thus a model for the guitar, which had been hitherto confined to more popular music. Clementi published a work by Sor dedicated to Kalkbrenner and Sor would also dedicate a work to Cramer. Likewise, Sor performed at the Philharmonic Society, founded by Clementi and other musicians, and shared the stage with these pianists. In his method for guitar, he mentioned these names and others as examples to emulate. Sor also wrote his works for piano in London, meeting the leading pianists there and broadening his musical activity. The recent finding in Catalonia of a Clementi & Co. piano signed by Sor has opened a new line of research.

The relationship between Beethoven and Clementi, a little-known chapter

One of the evolving disciplines, like so many aspects today, is music research. The work done by thousands of researchers in various geographies of the world and the numerous publications that appear continuously allow us to obtain more information and to complete or rectify the story that the tradition has been repeating.
This is the case with the new studies on Muzio Clementi (1752-1832). In the late 18th-century music scene, the focus of Londonian pianism, known as the London Pianoforte School, of which Clementi was one of the main protagonists, is one of the least explained. But who was this musician who described himself as "I'm a young Italian but an old Englishman"?

José de Udaeta, a dancer, choreographer, teacher and virtuoso castanets player, but especially a singular person on and off the stage, was born in Barcelona in 1919 and died in Sant Feliu de Guíxols in 2009. This year, therefore, we commemorate the centenary of his birth and ten years of his death. The pianist Marina Rodríguez Brià, who played with him on numerous occasions, recalls him in this article.