[...] Rodríguez is one of the fortepianists who traveled from all over the world to Zutphen, Vorden (Hackfort castle) and Amsterdam for the ninth International Fortepiano Festival, which lasts two weeks. [...] Rodríguez feels visibly and audibly in her element. She plays two encores, including – with some pride – a waltz by Fernando Sor, contemporary of Clementi, from her hometown of Barcelona. When she asks if the audience would appreciate a second encore, someone in the room shouts: "Don't stop!"
"


She told us very well interesting facts about Clementi [...] From the first moment you hear the enthusiasm in her piano playing. Original to choose for an unknown Viennese female composer, Marianna Auenbrugger (1759-1782). Beautiful music and beautifully performed.


With the two encores, she attracted even more attention from the audience, these encores were highly appreciated. 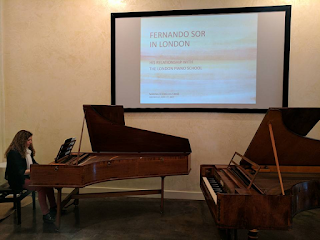 Marina Rodríguez-Brià, our special guest from Spain who received lots of compliments for her fine performance in the opening night concert, talked about Fernando Sor and his connection with the London Piano School. We were treated with his piano music not often heard in concerts.